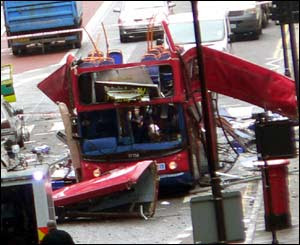 I want all the Bush-hating, lefty terrorist sympathizers to look at this and tell me they still believe Michael "There is no terrorist threat" Moore is their sage. Through-out Europe, every known radical Muslim extremist needs to be detained and shaken down for info, like they do at Gitmo. The pacifists in Europe (I'm looking your way, Chirac) needs to realize we are at war against these extremist, and have been since at least 1979, circa Iran, if not longer. Playing nice won't satisfy them. It never satisfies any group with stated ambitions of world domination. Wanting peace is great and noble and all, but there is no peace when one side sees glory in blowing up trains and buses and buildings filled with innocent people. They want to destroy all infidels. That includes YOU! They don't care if you sympathize with their cause or not. Do you think one of the terrorists was on a bus, counted the number of pacifists on it, and decided "Too many of our allies are on this bus. I won't blow it up." That's stupid. Spain and France bought themselves some time by laying down in the face of the threat. They bought a false peace, because sooner or later they will do something, prosecute someone, that ticks off the extremist, which will make them a target also. This attack today must unify Europe and intensify their resolve against the Muslim extremist who think it is their duty to kill innocent civilians. Unless of coarse you subscribe to the Ward Churchill "Little Eichmann's" philosophy, in which case, all Westerners deserve to die.
Posted by sonicfrog at 7:10 AM

Terrific. I never thought Michael Moore was that serious, so done.

Meanwhile, will you please tell me that you still think the point of going to war in Iraq is so we won't have to fight the terrorists in New York and London?

Nope. Never my arguement. Bringing real change to the region is enough for me. I can't tell you if this will work out as well as we would like; it will take a decade or more to resolve that question. But if we didn't go in , then things would remain stagnant or get worse. At least now, fingers crossed, they have a chance at something better. With Saddam, followed by Uday and Kusay, the Iraqi people would never have a chance at anything.